You are here: Home > Things to Do > Lough Foyle Trail 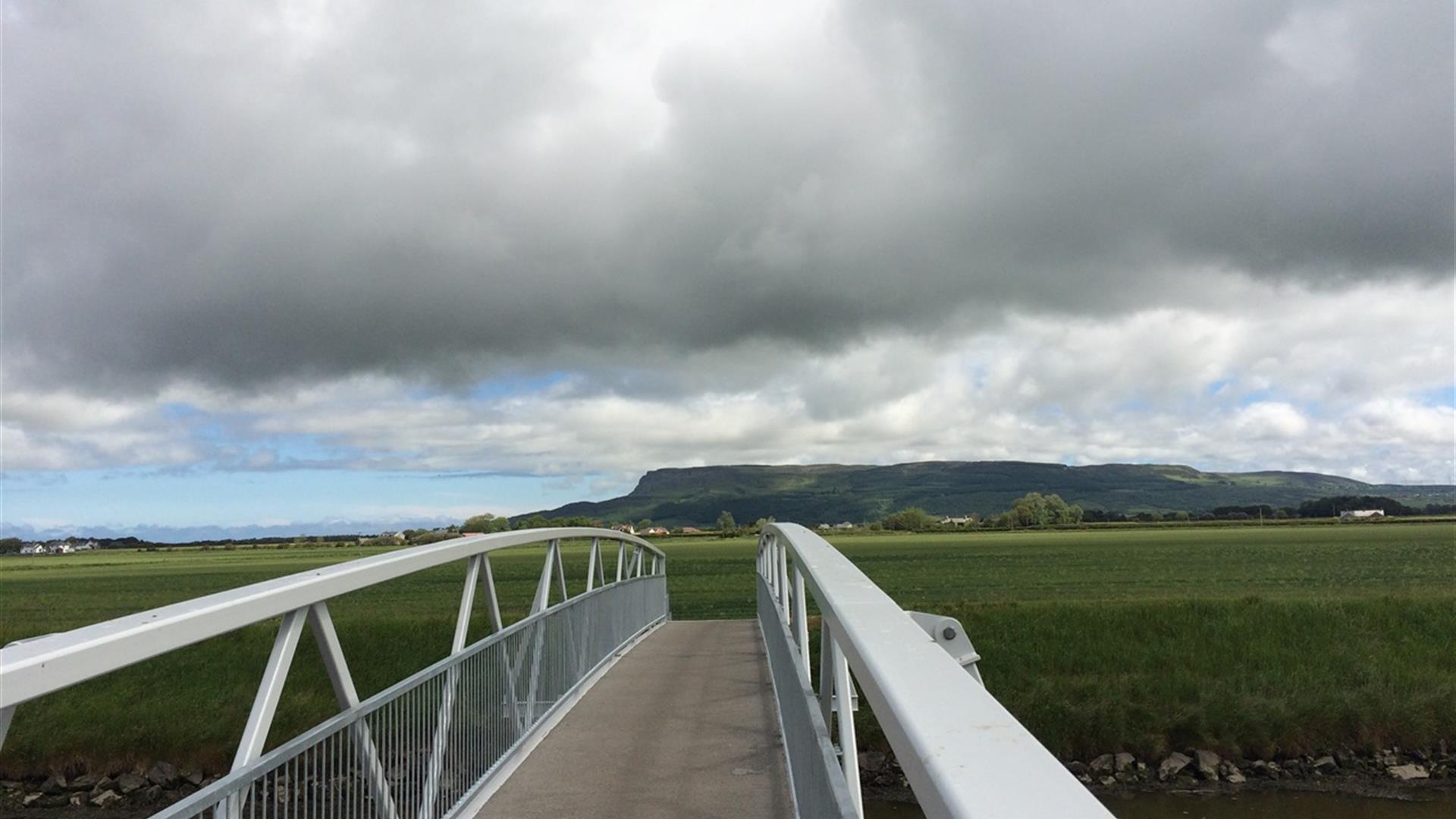 Lough Foyle is a sheltered haven on the Atlantic coast, a refuge for sailors, wintering birds, breeding seals and walkers. This is a flat, off-road walk, that for most of its length follows alongside a freshwater pond with dotted with reed beds. The expanse of Lough Foyle can be viewed on the other side of the sea wall for the length of the walk.

Route:
From Ballykelly car park, walk across the bridge and follow the gravel track to the left, following the river a short distance until you come to where it meets Lough Foyle. Depending on tide levels, you will see various waders and wildfowl (including Brent Geese in winter) feeding on the mudflats at the river mouth. Here, the track turns sharp right and runs between the ‘back pond’ or ‘back cuts’ that drains the reclaimed land (much of it lying at or below sea level) and the grassy bank that abuts the sea wall. Part of a concrete runway can be seen across the fields. This was the once strategically important RAF Ballykelly. Modern commercial aeroplanes cross these skies today, bound for the City of Derry airport to the west. The track continues for two miles until it comes to the Burnfoot River which rises on Loughermore Mountain to the south. A new footbridge was installed across the Burnfoot River in July 2015, which allows the walker to cross the river and continue walking along the shores of Lough Foyle. Turn left after crossing the bridge and follow the path to where the river meets Lough Foyle. Just offshore at this point lies the wreck of a World War Two aircraft, that can be seen at low water.  Continue eastwards walking along Ballymacran Bank, where the walker can savour a backdrop of Binevenagh Mountain to the northeast and the famed hills of Donegal punctuating the Inishowen skyline to the west. Between which lies Lough Foyle, Northern Ireland's biggest expanse of estuary, enlivened by the evocative primeval calls of waders and wildfowl. The route continues to run northwards to meet the River Roe with its remnant of estuarine salt marsh. The route continues for 800m from where it starts to curve eastwards at the Roe Estuary, and ends where the path meets the railway line between Derry/ Londonderry and Coleraine. The walk is linear, so return the way you came – don’t worry as the views are spectacular in both directions! Spectacular views can be enjoyed from the sea wall but take care if climbing the grassy bank or walking along the top of the wall at any point along the route. This walk can be enjoyed whatever the weather – but come suitably attired and be prepared for a change in the weather! The track is well surfaced and any sensible footwear should suffice. There are no picnic facilities or benches along the route and you should bring a flask, a groundsheet or blanket, and some snacks if you plan to take your time to savour the landscape, seascape and wildlife of this beautiful area.   This route can be started at either Ballykelly Bank or Ballymacran Bank, from both of which shorter sections of the route can be enjoyed. See the respective pages on WalkNI for each of these sections for route descriptions and maps. Parking is also available at Myroe Levels. Please note that the path is 5.2 miles in length (one way), 2.6 miles between Ballykelly and Ballymacran car parks, 1.2 miles between Ballymacran and Myroe carparks, and 1.4 miles from Myroe car park at the end of the path where it meets the railway track. See map for details.

On the Londonderry/ Derry side of Ballykelly. Turn on to Station Rd, a minor road that runs northwest off the A2. After about 1km, cross rail track by the level crossing and park adjacent to the bridge over Ballykelly River.